Audioshield is a Virtual Reality (VR) game that mixes boxing and guitar hero. Your controllers turn into two shields; one blue and one red. The beats of the song are represented by blue and red orbs. You have to hit the correct color orb with the correct color shield as the beats come flying in at you. There is also a third color, purple, which can be blocked by putting both shields together.

When I first heard of Audioshield I will admit I was a little skeptical. I’ve always scoffed at music-based games like DDR and Guitar Hero. I’m a girl who loves her RPGs and puzzles. If you don’t give me a nice bit of story, it’s hard to get me interested. Don’t get me wrong! I’m not going to harass anyone who does like and play music games. It’s just not my cup of cocoa.

So what happened? Why did I buy Audioshield? Why is it now in my top ten favorite VR games?

Because Virtual Reality. If I was playing this same game on a console or PC it just wouldn’t be the same. It’s something about the very realness of it that keeps my interest. It’s fun, challenging, and I can change up the pace, song, beat, even the stage! That’s a huge must-have for me because (with the exception of RPG’s) I get bored with things very quickly and easily.

Two things made me decide to pick up Audioshield. First, I love to share my Vive with friends and family so I try to grab a variety of games. That way there is something for everyone. Second, I saw a story of a guy who got into really good shape because of playing Audioshield as part of his diet/exercise changes. I love to try new fitness things! (See my aforementioned boredom problem.) It keeps life interesting!

The game is very simple and easy to pick up and play. Upon loading the game, the instructions will direct you to pick a song. They have some default songs to choose from and I started with those but they also have the option to browse your computer for your own songs or search YouTube for other songs. Now I mostly use YouTube.

Once you’ve picked your song you can pick your difficulty level. This setting will determine how many orbs there are to hit, how high up they’re coming at you, how often they’ll switch which side each color is coming from and how spread out from right to left they can be. The speed at which the orbs come at you is actually determined by the song so if you’re picking songs that are slower tempo then they’ll be easier than songs at a quicker tempo even if the difficulty setting is the same for both.

After that’s settled you can choose a shield type. I’ve tried all three and I can see that it’s a user preference thing. I love the Gladiator shield and hold the controllers sideways so it feels more natural to a punching motion. Most of my friends and family hold the controllers normal and prefer the default boxing-glove-style shields.

Next you pick your stage. So far I’ve haven’t really noticed any difference between them as far as gameplay goes but the different settings are interesting and offer some nice variety. I’d like to see more stages and shields added in the future. Maybe ones you could ‘unlock’ after completing a certain number of songs or reaching a certain streak.

Once you’ve picked your stage the game will load up the song for you and transport you there automatically. You’ll see two footprints on the stage floor to help you stay centered. You’re given instructions on how to play then let loose!

When the song is completed, you get a score screen that will tell you the stats of how well you did. There’s a counter for hit percentage, how many orbs you missed, and how hard you were hitting. You’ve also got an accuracy score and an artistic score which I have yet to try and improve on.

As expected, I was AWFUL at it when I first played. I’ve never played a game like this before but when I got used to the rhythm I was surprised to find it was really a lot of fun! Now I can play it on Elite mode and still keep my hits above 90%.

If there are any downsides to this game I would say that sometimes it can get disorienting when you miss orbs because most of them are flying straight at your face. It can be a bit blinding. On the harder settings it can also be difficult to see what’s coming through your own shields but practice helps with a lot of that issue.

Speaking of practice, though, there’s another great feature to this game that I didn’t expect. The songs are not exactly the same each time you play it. The beats and the orbs generally stay the same but they’ll switch up the colors on you making it more re-playable. You can’t memorize the pattern (something I naturally do) then get bored and quit playing. There’s always a challenge because it’s always just a little different. 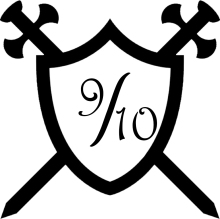 Needless to say I LOVE this game! It’s got the right mix of repetitive and changing to keep me interested and has that little competitive challenge in the stats you see at the end of every song. And as a bonus, my friends and family all like it too. It’s so nice to be able to switch things up, play music that matches your mood and get your fists (as well as your heart) pumping!

Overall I found this game to be highly enjoyable, very re-playable and a must-have for VR players. This game earns a 9/10 from me and I look forward to trying more of these types of games in the future. If there is a game you’d like me to review and try please let me know in the comments!